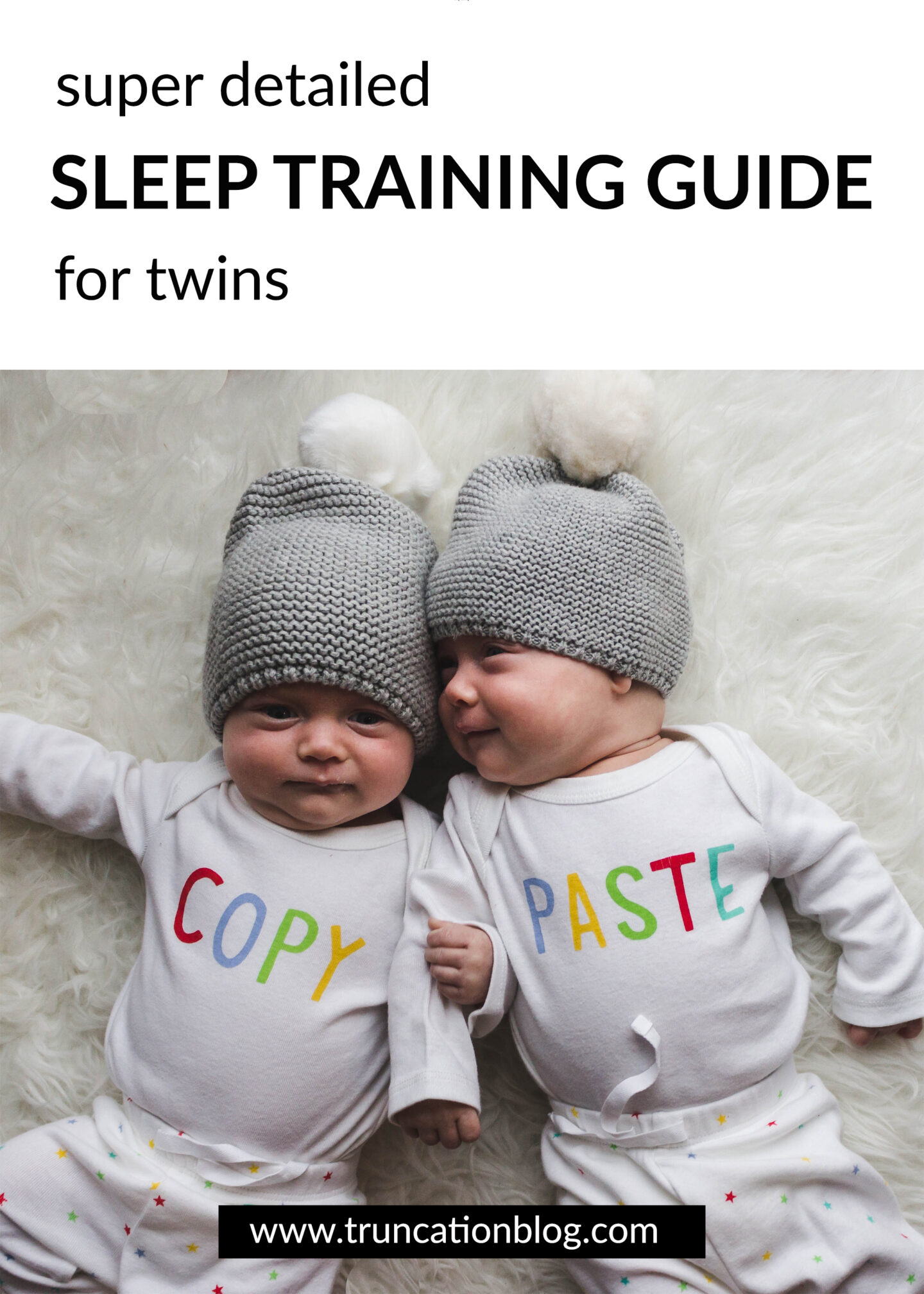 Alright you guys. Are you prepared for a super detailed sleep training guide for twins?

Well buckle up because here you go:

So what exactly are the girls doing right now?

If you read my post on how we feed the girls, then you know that we practice a modified version of Babywise.

Now before I go any further, I will preemptively say that I know Babywise is a somewhat (okay a lot) controversial method of sleep training due, in large part, to the “cry it out” method it has become synonymous with.

Let me just say that, if you have actually read the book (I have twice now), then you know that the author’s don’t actually tell you to let the baby cry even if they are showing signs of hunger. In fact, they constantly repeat that hunger signs always trump the clock.

What they do recommend is giving your baby a little bit of space to re-settle themselves if they’ve woken up from sleep. If the crying continues (or escalates), you check on the baby and soothe them however you need to.

But the biggest, and often times overlooked, point of Babywise is that a well fed baby is a well slept baby.

If your baby is taking in full feedings that allow them to fully consume the correct amount of hindmilk then they should naturally be able to sleep for better and longer periods.

It makes sense doesn’t it? I can’t sleep on an empty stomach either!

In my experience (we did Babywise with Kit as well), if you ensure that they are getting full feedings, better naps and sleeping through the night will naturally come sooner than later without having to resort to any sort of cry it out method.

Okay so there’s my little preface in why we practice Babywise.

So what does this actually look like for us?

Currently we do six feedings a day with about 4 ounces of milk being drunk at each feeding.

I will say that one advantage of exclusively pumping is that you don’t have to worry about whether or not they are getting the hindmilk. It’s all mixed together in the bottle.

If you are exclusively breastfeeding there are several ways that you’ll know they are getting it:

One: if they breastfeed for at least 15 minutes on each side.

Two: If they are not breastfeeding for at least a half hour, are they able to do three hour stretches between feedings? If not, they are likely not filling up on the hindmilk.

The basic rule of thumb is that a baby should be able to give you a three hour stretch if they have had enough to eat (this only applies to babies that are over six weeks of age… younger babies will vary in their stretches).

The other thing that we do is create a consistent wake time every morning (7:30). Doing this trains their brains to know when to expect their first feeding of the day, which allows them to make that stretch a little quicker.

Also, you may have noticed above that we wake them up at 11:00 p.m. to feed them. This is typically a very chill feeding. I do change their diapers, but I keep the lights low and try to keep them as asleep as possible.

The reason we wake them up is that I would rather have their long stretch be while we are sleeping rather than while we are awake.

So this is when they eat every day:

And yes if they are still napping when it’s time to eat we do wake them up.

One reason is that we follow the Babywise recommendation that you create a cycle for your babies of eat/wake/sleep (except at night obviously… then it’s just eat/sleep).

The goal is to create a pattern in which the baby is not coming to rely on milk in order to fall asleep. Instead, they spend a healthy (and appropriate) amount of time awake after their feeding so they can be put to bed while they are still awake.

So the twins have a little bit of play time after each meal and then when they start to fuss or yawn excessively, I put them down for a nap (at bedtime they get put down regardless of yawning or fussing).

Right now they are awake for about an hour and then are napping for about two hours.

So to put this all together these are the steps that we’ve taken to get them to sleep 8.5 hours at night by 8 weeks gestational age:

So there you go! Super long sleep training guide for twins so thanks for sticking with me. This twin thing is not the easiest job I’ve ever had, but putting the babies on a schedule has been our saving grace. I can’t imagine what it would be like without it. If you have any questions, I’m happy to answer them as best I can in the comments!

P.S. The twins onesies where a gift and are no longer available, but there’s a similar set here.