It’s officially November! I love November. It’s probably my favorite month. The weather has (usually) finally decided what it’s going to do and its the calm before the storm (i.e. Christmas)… snow is still magical and it ends with a big celebration of Thanksgiving. Like I said: I love it.

I’m using this month to challenge myself with a few things I know I need to be challenged with and I’m hoping it’s a month of growth as well. I’ll keep you posted. 😉

I’ve also been thinking a lot about my capsule. I was so excited to go into fall with my fall capsule. I thought I had the perfect fall capsule planned (I kind of forgot that it’s not possible to be perfect), and went into the cooler temps with confidence…

but I’m realizing now that I kind of got it all wrong. Not enough cozy options… too many of the same piece, but in different form. I guess it just goes to show you that you can do this sort of thing for almost three years and still not know exactly what you’re doing. Hopefully that’s encouraging for anyone starting out and feeling overwhelmed with the process. There is no shame in failing… I’ll just hit the reset button and get a do-over with my winter capsule.

But, because of the aforementioned troubles with my fall capsule, I’m planning to switch over to my winter capsule at the end of November (or sooner if the weather requires it).

And I’m going to be making some changes once I launch my winter capsule. I won’t reveal much now, but I’ve been thinking a lot about balance lately and prioritizing things that are important and it’s led me to some decisions about blogging that feel really good. Not trying to be cryptic… I just don’t want to reveal those changes just yet. I think (hope) they are good changes, but I’ll just have to wait and see what you guys think!

So with that said,

here are my capsule outfits from the week of 10/26: 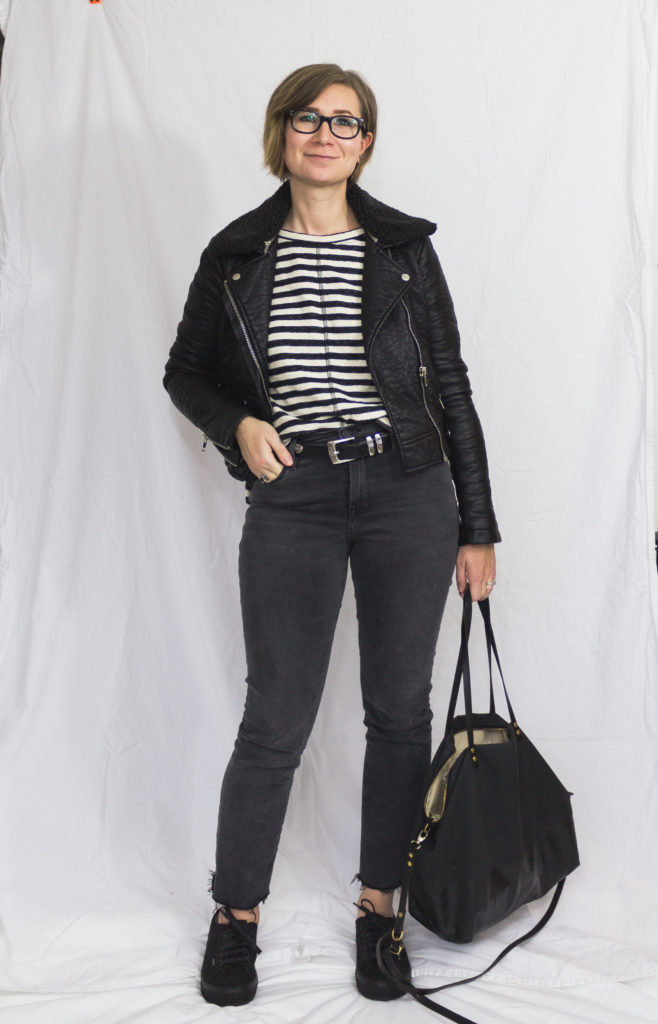 As I mentioned above, my fall wardrobe wasn’t as full of warm options as I needed so I’ve started pulling a few warmer sweaters into my fall capsule so I’m not dying of cold. Also, more to come on these shoes! 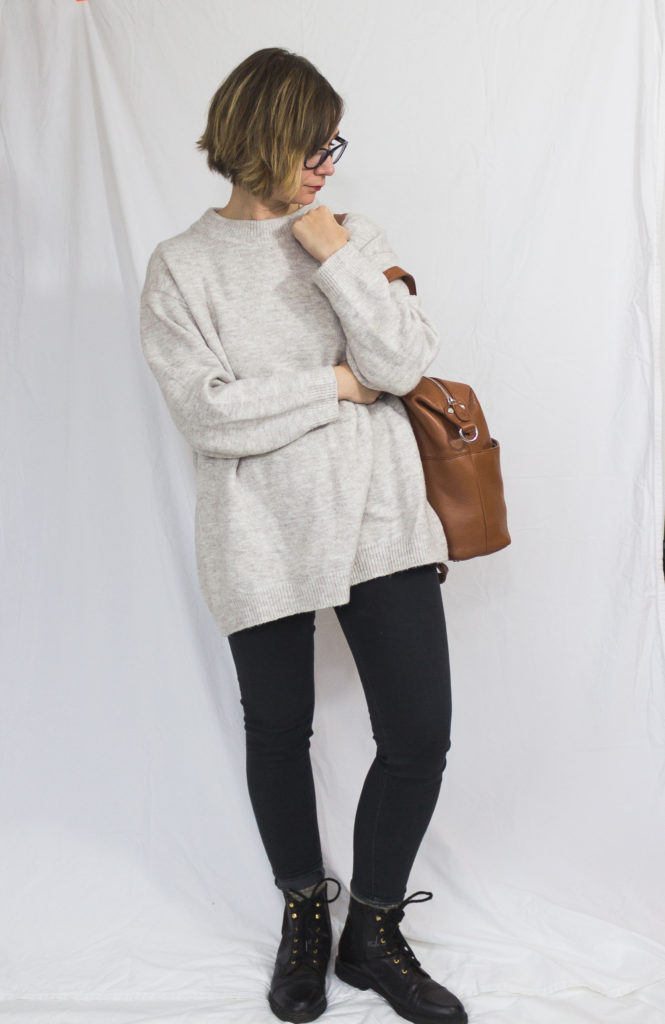 Another sweater I pulled out of storage. We went to an outdoor event this day for Halloween and I needed to be warm. 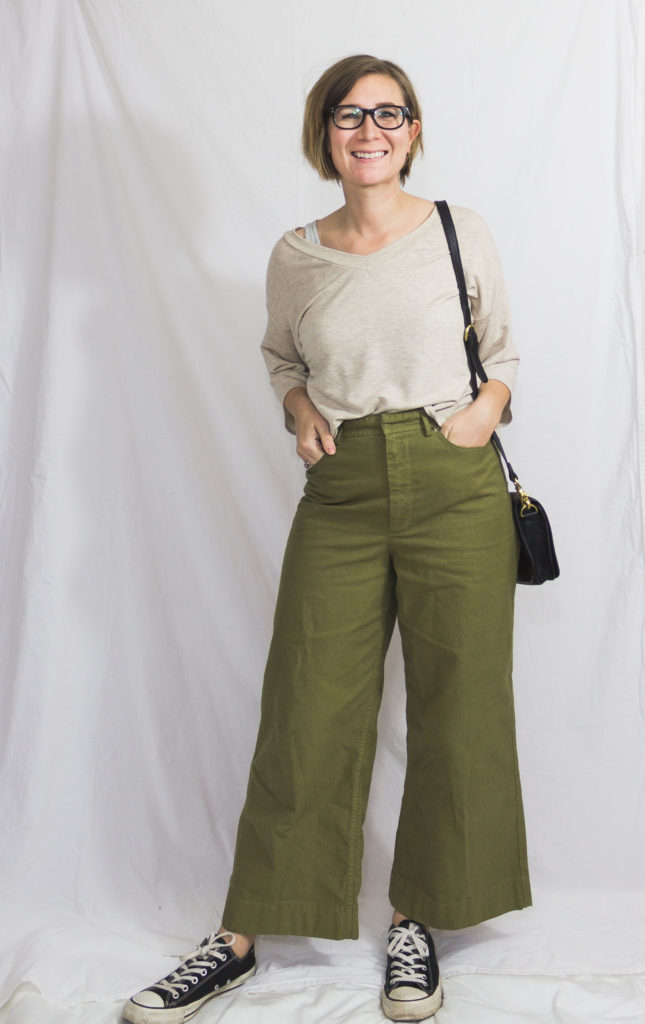 You’ll probably see these pants at least once a week until who knows when. They are just that good. Now that it’s getting colder I can’t wait to style them with boots. 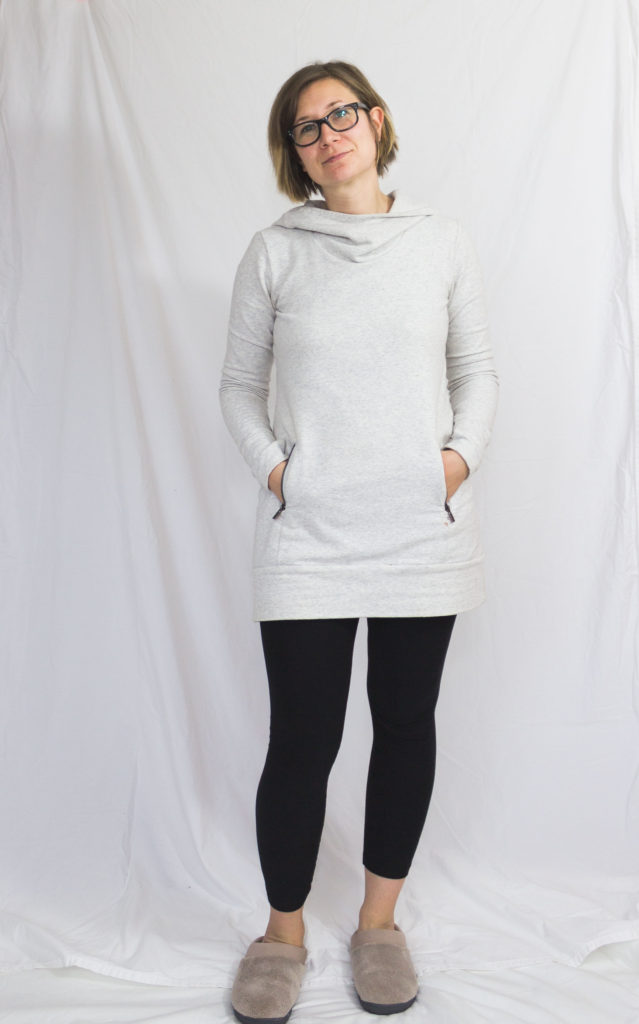 It was a jam packed weekend spent at the Mall of America (yuck!) with my little sister who was in a kendama competition. It was one of the nerdiest and coolest things I’ve seen in awhile, but man did it wear me out. I’m not meant to be at one of the largest malls in the world that many times in one weekend. It felt a little soul draining. So Monday I didn’t make it out of my loungewear and I am 100% okay with that. 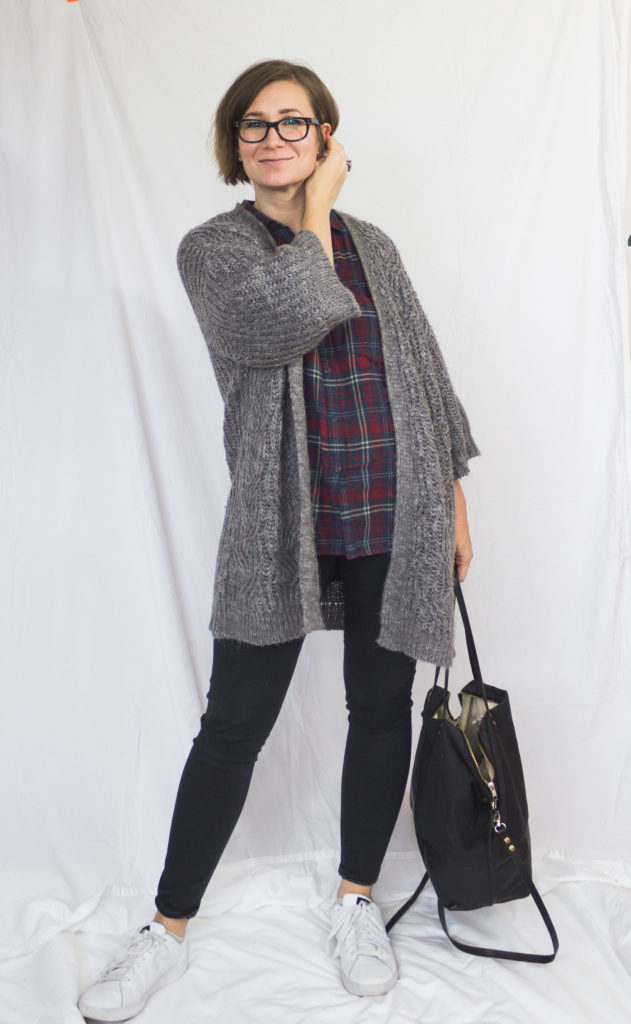 Happy Halloween! Okay here is some honest styling talk for you. I originally put on my Betina Lou turtle neck top with my Elizabeth Suzann linen top over it and it just did not work. Like at all. I’ve seen other people do it, but it felt so wrong on me. So then I reached for this flannel, but I had misgivings because I know it’s not as modern as some other pieces in my wardrobe. But then after I put this outfit together I absolutely loved it. And it made me realize that it doesn’t matter how modern a piece of clothing is or is not. If I love it, I wear it. End of story. 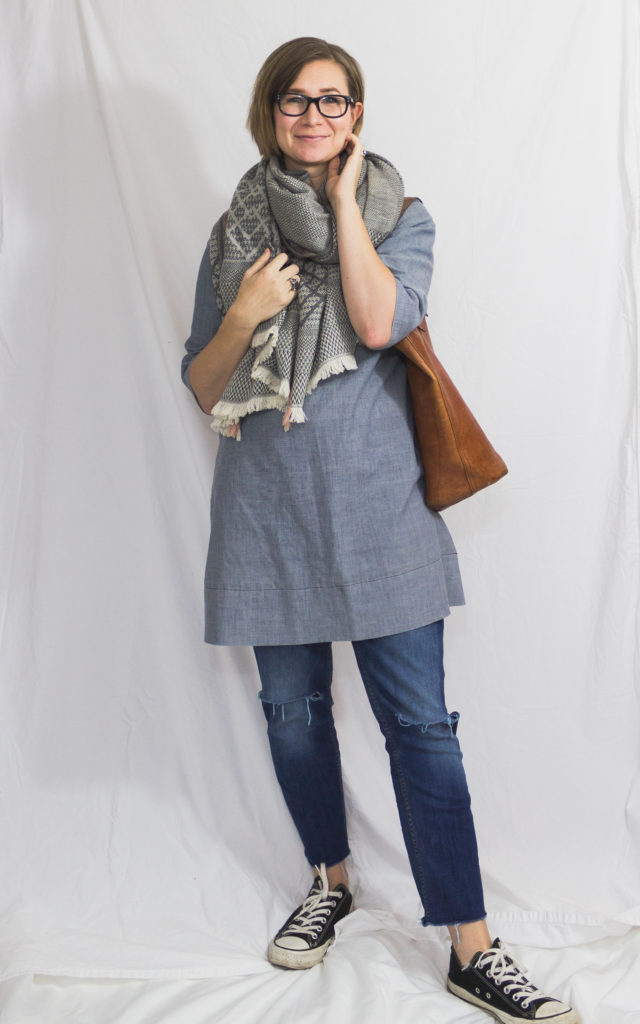 I’ve been wearing this exact same outfit for about five years now. Which means that these pieces are exactly the kinds of pieces I want in my capsules. Nothing fancy, but they have longevity because they are timeless. 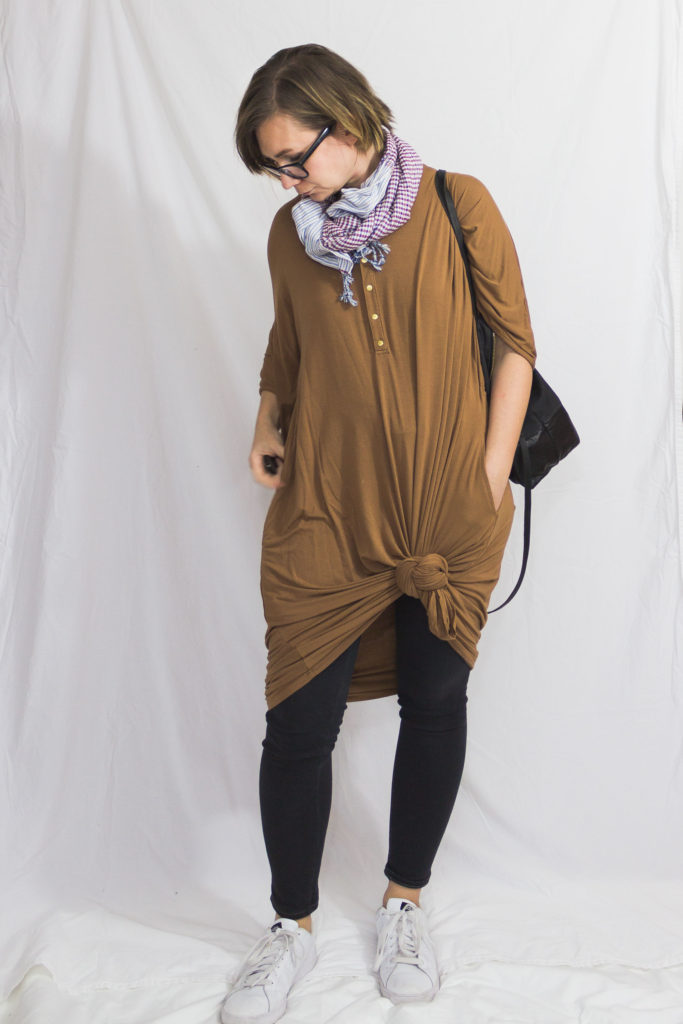 Caught in the act of remote shuttering (I just made that word up)! Let’s talk about these shoes. These are my Adidas that I’ve had for several years now. I bought my Veja’s to replace these. My plan was to sell these and keep the Veja’s. There’s nothing wrong with these shoes, I just really wanted a pair of Veja’s. Because they’re pretty buzzed about right now in the ethical fashion world… in other words: I got designer envy and made a decision out of that head space when I shouldn’t have. Now in my review of my Veja’s, I talked about how the sizing was a bit off, but I could live with it. Well turns out I couldn’t, so I traded with someone on Noihsaf for the next size up and I thought they were going to work out, but… they’re just slightly too big. So not only do I not fit in the sizing that Veja’s offer, but I also realized that the leather really is very stiff. I thought they would break in (and maybe they still will), but it’s not going so well. On the other hand, these Adidas, which I already owned, are actually super comfortable and soft. And they look really similar to the Veja’s. Point? I should have just stuck with these Adidas. So now my plan is to sell my Veja’s and just stick with the original pair. sigh.

This week was full of:

Things I want to remember:

Kit as a bee and the girls as flowers for Halloween

This serum has really been calming the redness in my complexion. Love it!

This vegan soup recipe… I could eat the whole pot in one sitting!

The new Blazers that Everlane released… if only my lifestyle called for blazers!

This wooden camera toy. Kit walks around the house taking photos of everyone and telling them to say cheese!

This scarf from Krama Heritage c/o (I’m wearing it in Thursday’s outfit). It’s inspired by ancestral Cambodian scarves. They are commited to the ethical textile industry and education in Cambodia, and they produce all of their scarves in responsible and fair conditions + they give 10% of the amount of each sale to the NGO For a Child’s Smile. Pretty cool! The scarf itself is great because it’s unisex so both David and I can wear it. Versatility at it’s best!

This modern fanny pack from Elia and Barry. I am swooning over this brand you guys! They have a very similar vibe to Elizabeth Suzann, but oh my! Everything is just so clean and modern. Plus they use real models, so you get a good sense for how things actually look. So much love!

The dreamy selection of dresses from Adored Vintage. This is the way to shop vintage you guys! She has the most beautifully curated selection of vintage and vintage inspired pieces. The perfect solution for those of you who are intimidated by thrift store shopping.

If you’re looking for the best retro inspired graphic tees, look no further than Dazey L.A. They have such a fun, vintage vibe with the best female empowerment messages.

So there you go! I’d love to hear from you guys. What are you loving at the moment? How are your capsules going? Let me know in the comments below!

I hope you guys have a great weekend, I’m excited to have a date tonight! And then the rest of the weekend there is zero plans. Bliss!