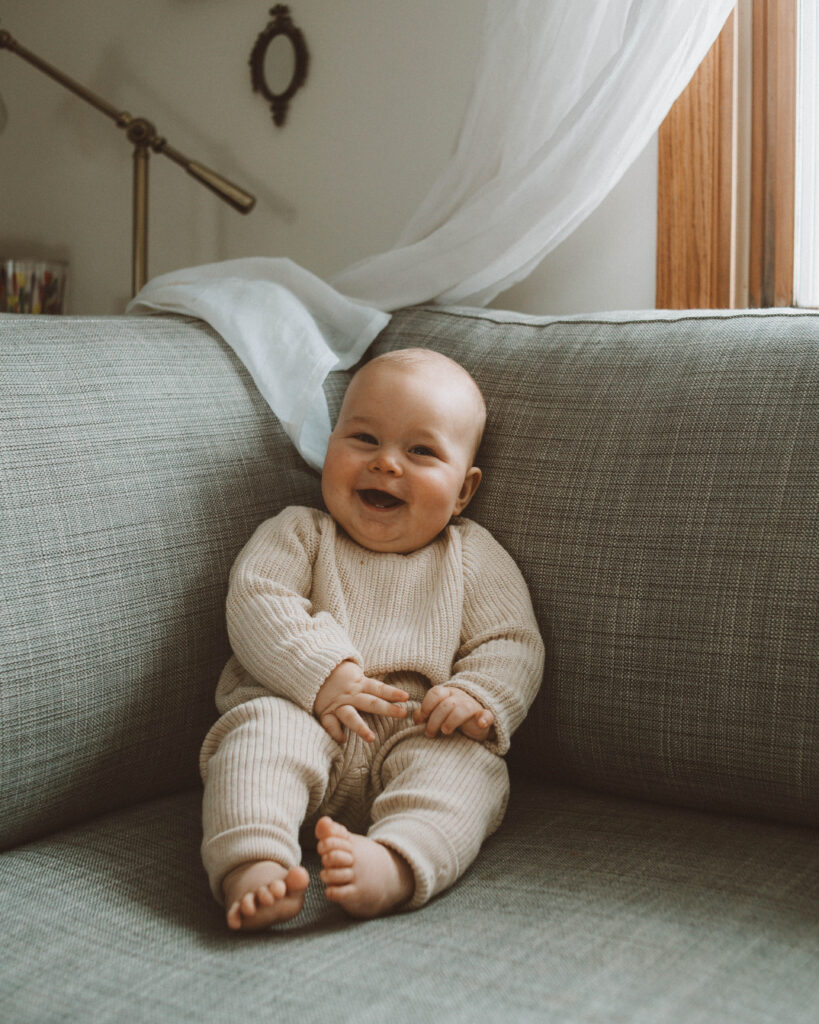 I can’t believe I just typed that title. Gabe is 6, actually he’s almost 7, months old! It feels like just yesterday that I was writing out his birth story for you guys.

I wasn’t necessarily planning on doing a 6 month update here, but a lot has been going on with him, and since grandma’s can’t see him right now and would probably appreciate the update… why not right?

Fortunately Gabe is still in his same high spirits even with all of the craziness going on in the world. 😉

To that point though, he’s honestly the happiest, most laid back baby. Literally the only time he cries is when he’s been waiting too long for his meal or he has a poopy diaper. It’s been such a refreshing change after having two very vocal, not laid back twin babies ha!

So let’s break his update down into categories:

This is a pretty easy update as he’s been sleeping 12 hours at night since he was about 4 months old… I told you he’s laid back! But we also did the same sleep training with him that we did with Kit, Ella, and Rosie. Basically we just really work with our babies on staying awake and taking in a full feeding (i.e. longer) every time they eat. Doing that basically ensures they’ll sleep longer because their tummies are full. It takes a lot of work to train them to eat those bigger meals, but it’s 100% worth it in my opinion! All four of ours slept through the night before 6 months, and I only had to do “cry it out” with Rosie for one nap (she didn’t cry for very long… I don’t agree with letting your children cry for long periods of time, but I do think kids need to learn how to self soothe). The other three never needed it!

So he goes to bed around 7:30 and then gets up for the day at 7:30. Again, all of our kids sleep until about 7:30-8:00 and it’s because of sleep training. As soon as we give our babies a bedtime (usually around 2 months), we start training them to wake up around the same time everyday. You do this by treating early morning feedings (anywhere from 5:00-6:30 or 7:00) as nighttime feedings. If the baby wakes up at 5:30, you let them nurse in the darkened room with the sound machine still on, and then you immediately put them back to bed. You do this no matter what time they wake up until it’s time for them to get up for the day at which time you go in an wake them up. So even if they got up at 6:30 to nurse, you still go get them up at 7:30 (or whenever you want your day to start). This works folks! It’s worked for all four of mine (with consistency on my part), and I’m so thankful for our later start to the day.

He’s now down to two naps because he started solids a month ago, and he naps for about 2-3 hours for each nap.

Last week we began the process of weaning. I was kind of surprised by it, but also not really surprised to be honest.

he’s just always been such an “enthusiastic” eater, and I wondered if as he got older, it would become too much for me.

And that’s basically what happened. He had been getting super frustrated every time he ate because the milk wasn’t coming fast enough (we had already been supplementing my milk with formula for a few months), and so he started chomping down on me. And I don’t mean biting… because Kit weaned at 11 months because she was biting me. I mean chomping. He already has a few teeth, and he would get frustrated my milk wasn’t letting down and so he would chomp down and clench down until I could pry his mouth off of me! After a couple of weeks of this, I knew it was time. No one was happy! I told you, he only cries when he’s not getting his food fast enough… he is driven by food ha!

It’s bittersweet for me as I am sad to be done breastfeeding him. Being able to do so after not being able to with the twins was very healing for me, and it was a special time for us… but with that said, I have never handled breastfeeding hormones well. They cause a lot of anxiety, moodiness, and brain fogginess for me so I am happy to allow my body to go back to its normal balance.

I’m in the process of letting my milk supply wind down right now. I basically just pump for every feeding I was still doing, and then after a few days I pump for 13 minutes instead of 15 (and then repeat that cycle until there’s nothing less). I also “restrict” my calories (I just cut out a snack), and that helps the milk production slow down so I don’t get engorged.

That’s what I’ve done for all three weaning processes so far, and it’s worked really well.

So now onto solids:

I introduced purees to Gabe when he was 5.5 months old. We were giving him SOOO much milk at that point that I just knew he needed more ha!

I always start with purees because I think they are a great way to get the baby used to the idea of something other than milk in his mouth.

That takes a couple of weeks, and then I switch to finger foods. Now he just gets cut up pieces of whatever we’re eating. If the fruit or veggie is too hard I’ll just throw it in some boiling water for a few minutes to heat it up. Easy!

He also started with a sippy cup and water when we started with finger foods, and it’s so cute to see him trying to pick it up and drink (it usually ends with a bonk to the forehead or cheek 😂).

As far as what he’s doing these days:

For his gross motor he is starting to be able to sit more comfortably without folding over so much. He can even play with a toy for a little bit when he’s sitting.

He’s SO social so he’s a bit advanced in his social and verbal (but all of my kids have been very behind in gross motor and ahead in social and verbal so I’m not surprised). He’ll even say hi already and it’s the cutest thing! When I go in to get him after a nap, he’ll grin up at me and say “hiiiiii!” in his little grunty baby voice. Kills me every time!

He’s honestly the sweetest little baby, and I’m so thankful for him. I can’t wait to see what the next six months with him bring!

There have been a few little baby items this time around that we’ve really found useful (I feel like I’m finally figuring out what I like just as I’m done with babies ha!), so I thought I would share them here:

These bibs are the best bibs I’ve found for first foods! We have the silicone ones you can wipe down, and we’ll probably switch to those eventually, but I hate how those first solids mix with all of the baby drool and then just smear all over those silicone bibs. These absorb a bit more so it just makes for a cleaner experience (I’m kind of a clean freak ha!), and then I can just throw them in the wash to get them clean.

We switched to these bottles once I started the weaning process because they’re larger than the ones we were using (we were just using the standard medela ones that came with my pump with a Dr. Brown nipple attached). We used the large Dr. Brown bottles with the girls, but they were the BIGGEST pain to clean because they each have a filter attached to them. It’s supposed to help with colic so if that’s a concern then they are very helpful I’m sure! But I wasn’t going to waste any more time cleaning any those dang filters! 😂 We used the Dr. Brown’s with the twins because they have nipples that grow with their ages, and with the girls being preemies that was very helpful. Gabe guzzles his bottles no matter the size of the nipple, so these bottles have been a great find! They are squishy so they feel like a boob, and the nipple is wide to give them same effect. He really likes them!

I don’t have much to say about these sleep sacks because they’re pretty basic, but we have used them with all of our kids and we love them! They stay nice and cozy in them, and the zipper unzips both way so late night diaper changes are super easy.

These resuable changing pad liners have been the best thing! Gabe has had SO many blowouts, and with these you can just take the liner off, throw it in the wash and put a new one one. So much easier than having to wash the changing pad cover every time!

Gabe LOVES this little toy. It’s super easy for him to grip on to and he loves to turn it around and look at all of the colors. It’s the perfect toy to give him when he’s practicing his sitting because it keeps him really focused so he forgets he’s “working.”

Well that was super long! If you made it all the way to the end thanks for reading! Honestly, I mostly wrote this so I could look back on it later… I realize that no one cares about a child more than their mom ha!

If anyone else has helpful little tidbits about this age, leave them in the comments below! I always like to hear what’s working for other people!